“Here there is no Greek or Jew, circumcised or uncircumcised, barbarian, Scythian, slave or free, but Christ is all, and is in all. Therefore, as God’s chosen people, holy and dearly loved, clothe yourselves with compassion, kindness, humility, gentleness and patience, Bear with each other and forgive whatever grievances you may have against one another. Forgive as the Lord forgave you. And over all these virtues put on love, which binds them all together in perfect unity. Let the peace of Christ rule in your hearts, since as members of one body you were called to peace.” – Colossians 3:12-15

It’s the discount season. You may have been prepping for these Holiday sales for months so you can purchase that 75 inch HD 8k OLED UHD LMNOP TV that goes on sale. Perhaps you’ll be waking at 4 am on Black Friday to get that 300% early bird special.

An Uncommen 2018 year in review! 2018 was a powerful year for Uncommen as we took significant strides in the growth and reach of the ministry. We spent all of 2017 and the first half of 2018 finishing off some of the administrative projects that gave us better functionality and cut costs. We hit some excellent milestones this year that will help us set bigger goals for 2019.

What It Takes To Run a Non-Profit

We’re glad you asked! Many times throughout the year we get approached by people wanting to help further the reach of Uncommen and help us reach men around the world. The amount of encouraging feedback we receive from people is staggering and makes us take this God-sized task all the more serious. After all, we are wanting to bring God Glory, encourage men to be the Husband, Dad, and Leader they were always meant to be and have some fun while we do it.

As for the day-to-day activities in the Uncommen studio, it’s meetings, creative ideas and lots of coffee. But we wanted to list some things that we are in need of in 2018, so you could be praying about it and asking God how He’d like to you get involved with Uncommen right where you are. 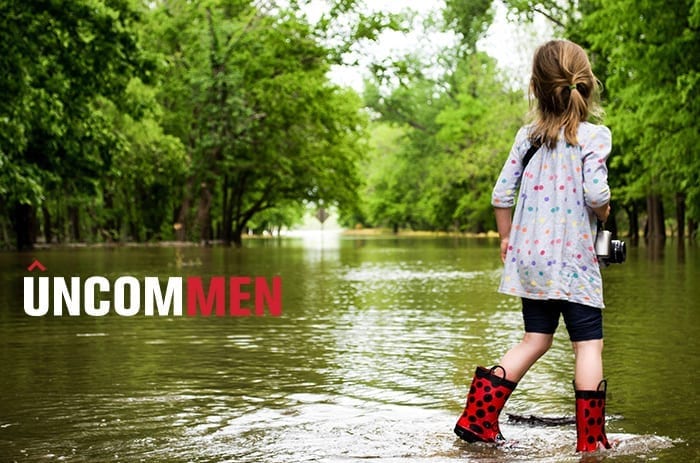 I was born and raised in New Orleans and spent 38+ years of my life there. Any good Cajun knows Hurricane season runs June through November. We usually have to evacuate the area at least once a season for an unplanned overnight stay in the region. But having gone through Katrina and having been an evacuee, I understand completely what the people in Houston are going through. You think it’s just another storm that will not be as bad as the weather man is saying. Get some sandwich stuff, water, candles and ice for the igloo and you’ll be set when the power comes back on.

That doesn’t always happen. When my wife and then two young boys left for Katrina, we didn’t know we’d not back for over 5 months. That’s when the act of selling our house took place as we were now living clear across the country in Arizona. The people of Houston and the surrounding area are in for a big life change. For the first 2 weeks after the storm hit, life was about needing clothes, underwear, toothbrushes, socks, luggage, money and much much more. We were spending time at Red Cross Shelters discussing what the plan was for the foreseeable future. Were we going back home? The Levee had broken and at the time, we didn’t know if our house was even still standing. We packed what we could in our Mini-van, but that hardly is enough to start a life over again. We wanted to reach out to our current and future audience with some information about our newsletter and our goal to provide you with Uncommen content. We’ve noticed a couple of “Did not sign-up for list” or “No longer interested” entries on the reports. We only want to deliver content to those who want to get it. So here we go…